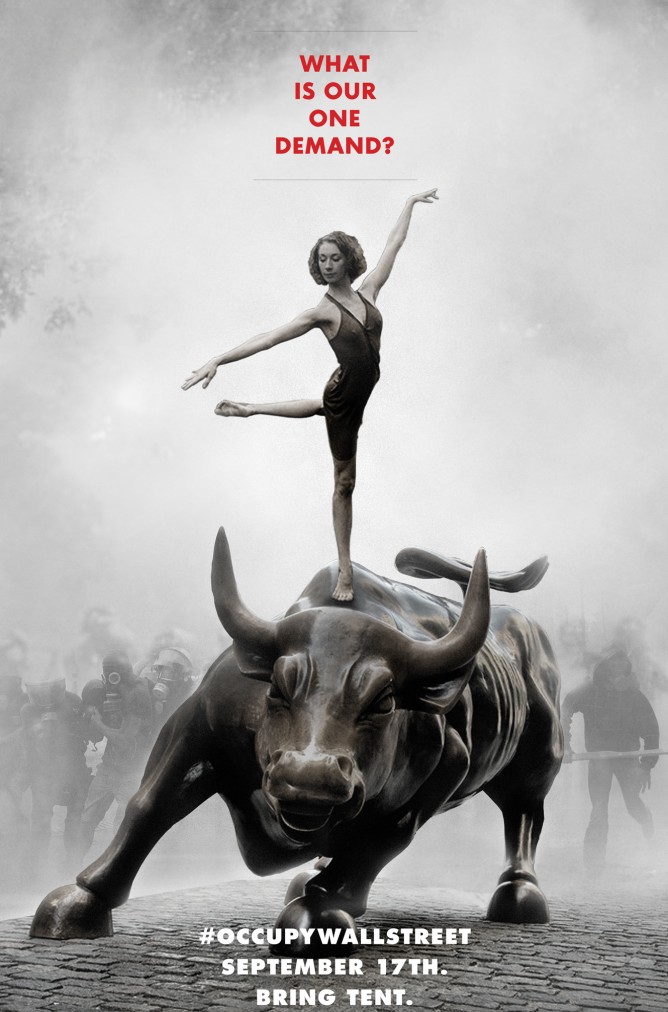 “The Ballerina and The Bull”–the image that launched Occupy Wall Street in September 2011. This photo was featured on a pull-out poster in Adbusters magazine, and apparently was noticed by quite a few people!

What is “Occupy” / “Occupy Wall Street”? –some helpful links

Declaration of the Occupation of New York City–mainly a list of grievances.
Occupy Wall Street: FAQ (frequently asked questions, answered by The Nation magazine’s Nathan Schneider)
Video:  Media analysis:   The Young Turks tell it like it wasn’t reported:  30-50-100,000 people marched to blockade the Port on Nov. 2 —although many outlets in MSM reported 4,500 down to 3,000.
http://www.youtube.com/watch?v=sk9rZxCVff0
.
Here’s an early (October 2011) ‘report’ on what Occupy Wall Street was asking for from an conservative outlet’s perspective:
http://dailycaller.com/2011/10/04/occupy-wall-street-protesters-are-demanding-something/
.
Here’s a more accurate list of the priorities for Occupy, written by progressive documentary filmmaker Michael Moore:
http://www.michaelmoore.com/words/mike-friends-blog/where-does-occupy-wall-street-go-here
And here’s Moore with Naomi Klein and others, in a panel discussion focused on “the movement against corporate power”:
http://www.democracynow.org/2011/11/25/occupy_everywhere_michael_moore_naomi_klein
.
_____________________________________________________

Money Out of Politics! This pro-capitalist investment-news guy speaks the language of non-partisan disgust with financial governance:
Dylan Ratigan began his Get Money Out / United Republic campaign for a Constitutional amendment to get money out of politics with this ‘rant’–which gets really good about one-third of the way through:

http://www.youtube.com/watch?feature=player_embedded&v=gIcqb9hHQ3E
–and here’s the website for the Get Money Out campaign:
http://www.getmoneyout.com/

Video:  Mic-Check!!!  When Wisonsin’s union-busting governor gave a speech at Chicago’s Union League Club the morning of Nov 3rd, he had some unexpected guests:  an organization called Stand Up! Chicago

MATT TAIBBI:We have two-and-a-half million people in jail this country, you know, more than a million who are in jail for nonviolent crimes. And yet, we couldn’t find a single person on Wall Street to do even a day in jail for losing 40 percent of the world’s wealth in a criminal fraud scheme? …this goes beyond the cliché that rich people have better lawyers and they have an advantage. This is a step beyond that. This is a situation where the system is completely corrupted, and it’s true regulatory capture. The SEC and the Justice Department are essentially subsidiaries of Wall Street.