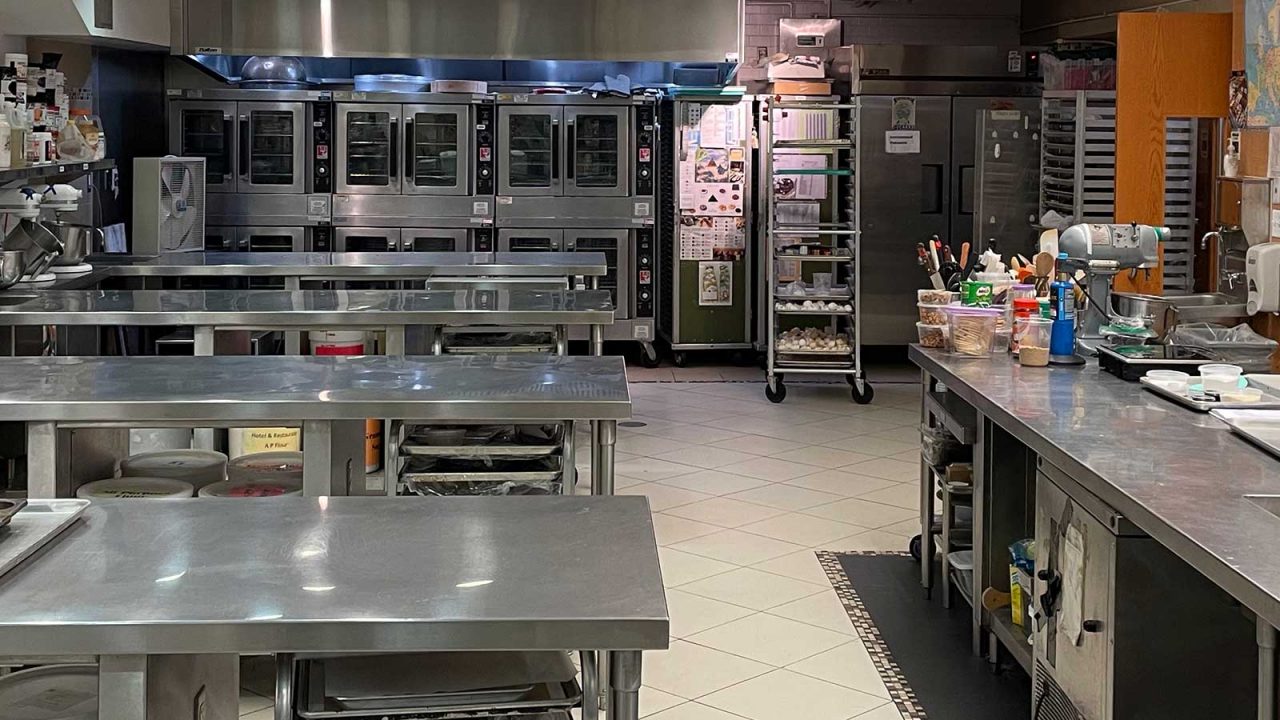 A graduate of The Hotel & Restaurant Management Program at City College of San Francisco. Then a Culinary Apprentice before working at The Dorchester Hotel in London for 2 years. From there, pastry school at the Richemont in Luzern Switzerland and the Ecole Nationale Superieur de la Patisserie in Yssingeaux France. A total of 7 years working in Switzerland, France, Italy, England and Japan before taking the position of Head Pastry Chef at the Mark Hopkins Intercontinental Hotel in San Francisco for 13 years. Culinary Instructor at the California Culinary Academy/ Le Cordon Bleu school and now full time Tenured faculty at Laney College.

Born and raised in the restaurant business, Chantal Martin is the fourth-generation professional chef in her family. Trained on the line, Chef Martin received formal instruction at L’Ecole de Cuisine Française Sabine de Mirbeck in England and École Supérieure de Cuisine Française Grégoire-Ferrandi in Paris, France. In addition to working in restaurants, hotels and as a private chef stateside and abroad, Chef Martin was chef-owner of La Brasserie and Trio Bistro in Oakland for over 15 years. Chef Martin attended California State University, Hayward, graduating with a B.S. in Business Administration. As well, Chef Martin is a certificated Paralegal and Notary Public and has worked as an Estate Manager and Executive Assistant. Recognizing that her love of culinary arts wove itself into all of her work, Chef Martin decided to seek an opportunity to combine her passion, experience and education- to teach! That opportunity presented itself in 2011, when she became a Culinary Instructor at Laney College. Along with teaching, Chef Martin enjoys serving on the Laney College Faculty Senate, as Department Chair and is a member of Les Dames d’Escoffier.

Cheryl Lew was born and raised in the San Francisco Bay Area. Her grandfather opened the first dim sum restaurant in San Francisco Chinatown and her Uncle Benny had a Chinese restaurant in San Pedro, California. Her mother was a preschool teacher who encouraged fine arts and crafts, while her father was a chemist in the sugar industry. Cheryl has a degree from Cal Berkeley in Asian American Studies with an interest in chemistry. From 1990 to 2016 she owned and operated Montclair Baking, a bakery in the Oakland Hills. The bakery earned accolades locally and nationally for their baked goods. She has won national contests which include Domaine Carneros Ultimate Wedding Cake Contest to Food Network Cake Challenge Spooky Cake and Candy Contest. Amongst her reviews she is proud to be included in the Slow Food Guide of San Francisco. She is a Certified Master Baker through the Retail Bakers Association of America. Cheryl is featured as the pastry chef in the movie “Eat at Bill’s” about the relationship between farmers, Montery Market in Berkeley and chefs who support and shop there. She currently teaches full-time at Laney College. In addition she is board member of the Berkeley Food Institute focusing on public policy of food industry and culture as well as a minor partner at a local bakery. Her hobbies include growing her own garden, art and food culture studies.

Laurence Jackson’s career started in 1980 when he graduated from the California Culinary Academy. He then went to work for Amelio’s Restaurant in San Francisco which was a landmark destination from 1980-1983. Chef Jackson soon went to the Metropol in Berkeley where they were voted Best French Restaurant (East Bay), then on to the American Hawaii Cruise Ships from 1983-1984. In 1987 he became one of the opening chefs for the Nikko Hotel in San Francisco and worked there for ten years (including five years as Executive Chef). While at the Hotel Nikko, Chef Jackson Some received numerous awards including: 1990 Quady Wine Competition (first place), 1999 Quady Wine Competition (second place), March 1995 Most Electric Appetizer, 1999 American Food and Wine. From 1997-2004 he was at Jordan’s Restaurant Claremont Hotel (AAA 4 Dimond Award for dinning – the only East Bay restaurant to receive this award). He was a member of Les Toques Blanches from 1995-1997. Laurence Jackson was given the chance to teach at the California Culinary Academy and Laney College where he found his new life calling – and soon made it his lifelong commitment. He has a passion for teaching others his lifelong dream: to enjoy food.

David Chavez was born and raised in El Paso, TX. He found his passion for cooking at a young age by cooking with his mother. Growing up in a largely Hispanic community Latin flavors were his first introductions to food. Some of his first food memories are picking fresh vegetables from the garden for the weekly salsa.

At the age of fifteen he began working at a local diner washing dishes. This first introduction into restaurants started a lifelong passion for the hospitality industry. After working at a bakery and as a line cook at a local restaurant he decided to educate himself to better his career as a chef. He attended culinary school at Texas Culinary Academy Le Cordon Bleu in Austin, TX with a goal of working in fine dining. Upon graduating, he found his way to Las Vegas to work at Thomas Keller’s Bouchon Bistro at The Venetian. Soon after starting he was promoted to sous chef. Working under Chef Mark Hopper he honed his skills and was recognized by Chef Thomas Keller as a leader and was asked to be part of the opening team for a Bouchon Bakery at Rockefeller Center in New York City. After moving to New York to train at Per Se and Bouchon Bakery leading up to the opening he soon was tasked with operating both Bouchon Bakery locations in New York as Chef de Cuisine. After the successful opening of the bakery David was asked by Chef Keller to relocate to Beverly Hills to be Chef de Cuisine of Bouchon Beverly Hills. Soon after arriving in California David began searching for ways to be closer to his food. This search led him first to Sacramento where he was the Executive Chef at The Kitchen Restaurant a one star Michelin restaurant where he curated a weekly tasting menu using only the freshest local ingredients. Once being introduced to the vibrant farmers markets of the Bay Area David then found himself still looking to be closer to his food. He made the move to the Napa Valley to be the Executive Chef at Chef Richard Reddington’s one star Michelin restaurant Redd in Yountville, CA. Being in the center of the wine world David continued his journey in the hospitality industry by doing what few chefs do and made the leap from the kitchen to the dining room as General Manager of Redd’s sister restaurant Redd-Wood, an upscale pizzeria in Yountville known for regional Italian cuisine and an acclaimed wine list.

April Bankhead was born and raised in Alameda County. Ms. Bankhead first became interested in the Hospitality industry when visiting a friend in Yosemite National Park. In 1989 she relocated to Yosemite and worked for Yosemite Park & Curry Company.

Ms. Bankhead was able to combine her love of nature with her passion for Serving others. She worked a variety of positions including PBX operator, hosting, bussing, cashier, to front desk clerk as well as working at the ice-skating rink.

In 1992 Ms. Bankhead next relocated to the Monterey Peninsula area again working in the Hotel industry. Ms. Bankhead was employed for Pebble Beach Company where the motto was “exceed every guest’s expectations every time” cementing her interest in the travel and tourism industry.

In 1996 Ms. Bankhead graduated from Mills College with a B.A. degree in History with an emphasis on American Immigration. She credits her work in Hotels and Restaurants for financing her lifelong dream of being the first in her family to graduate college.

After Mills, Ms. Bankhead worked in fine dining in Kensington at 385 Colusa while attending St. Mary’s College in Moraga to study Education. Once she finished her education program she worked for West Contra Costa Unified School District, but was reluctant to give up her work as a fine dining server.

In January 2000 Ms. Bankhead was given the opportunity to combine her love for Hospitality with her passion for teaching and joined the Culinary Arts program at Laney Community College as an Instructor where she has remained. Ms. Bankhead believes that foods from around the world inform every aspect of life from the personal to the political and continue to inspire her to teach food service as a way to engage in the world that we all share.